Although malaria infection is a global health issue, demanding 1 million lives annually [1], a cost-effective, yet highly sensitive diagnostic method has not been developed. We aim to design a compact and inexpensive clinical diagnostic device that could be operated without any expertise in the field of medicine or engineering. The principle of the detection – first suggested by Newmann and coworkers [2] – is the measurement of magnetically induced linear dichroism exhibited by malaria pigment (also known as hemozoin crystals), which is present in human blood only if infected by malaria parasites.

Hemozoin Crystals, as the Target of Malaria Diagnosis

Malaria infection is caused by the eukaryotic parasites of the genom Plasmodium, transmitted by their primary hosts, the Anopheles mosquitos. During the infection the malaria parasites invade human red blood cells, digesting hemoglobin. After the complete rupture of the cells, the parasites burst out and attack new RBCs – thus causing fever to the patient at periodic intervals. 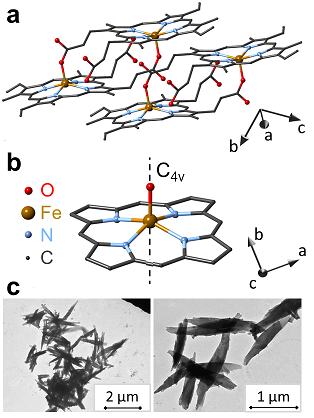 Malaria pigment, also called hemozoin, is a byproduct of the disease. Digestion of hemoglobin by the malaria parasites results in the accumulation of monomeric heme. As it is highly toxic to the parasites, they transform heme into an insoluble crystallized form (see Figure 1), called hemozoin and also known as malarial pigments. This process is accompanied by the change in the valency and the local coordination of iron and leads to the transformation of low-spin diamagnetic Fe2+ ions contained in oxyhemoglobin into high-spin (S=5/2) paramagnetic Fe3+ ions in hemozoin. The crystals are formed in a long, needle-like morphology as shown by TEM images in Figure 1. 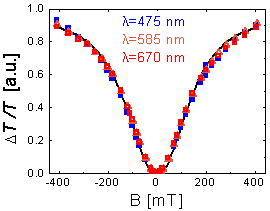 These micrometer-size crystals are an appropriate target of diagnosis owing to their unique properties. As a consequence of their low-symmetry crystal structure, the paramagnetic hemozoin crystals show easy-plane magnetic anisotropy, where the hard magnetic axis corresponds to the direction of the Fe-O bond (which – however – does not coincide with the fore-axis of the crystal growth). When suspended in blood, this magnetic anisotropy enables the single crystals to be orientated along their easy axes by an external magnetic field. Due to the dichroic nature of the individual crystals (originating also from the low crystal symmetry), this co-aligned ensemble shows macroscopic linear dichroism (i.e. absorption difference) for polarization along and perpendicular to the direction of the magnetic field, which is readily detectable by measuring the transmitted intensities for the two polarization states as shown in Figure 2.

In order to be able to measure extremely weak polarization effects on the probing light—as produced by a small concentration of hemozoin crystals emerging in blood at the initial stages of the infection—we use a scheme where the magnetic field is rotated in the plane perpendicular to the light propagation. This forces the hemozoin crystals to rotate and, thus, act as an array of spinning polarizers (Figure 3d).

Figure 3: Model of magnetic alignment of hemozoin crystals in a dilute suspension. Red bars represent the magnetic hard axis of the crystals. 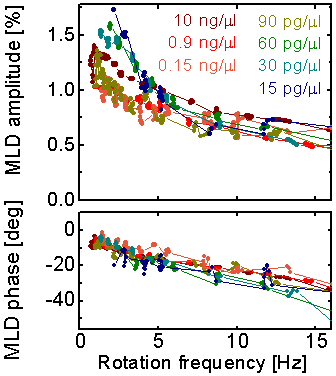 Our concept [4]—realized by the application of a cheap laser diode, a Hallbach array magnet, a Rochon prism and a balanced photodiode bridge—provides an unprecedented sensitivity in the detection of malaria pigment corresponding to the minimal concentration of 0.5 ng/ml in blood plasma (see Figure 4).