Metals with fully spin polarized conduction electrons, also called half metals, are important in spintronics, while magnetic semiconductors span a broad range of applications from data storage to optical communication. The synthesis of such materials can be optimized by studying their spin-polarized band structure, which is a challenging issue both from experimental and theoretical side.

For this purpose we apply broadband magneto-optical spectroscopy and detect changes in the intensity and the polarization of light reflected back from (or transmitted through) the magnetic material over a wide range of photon energy. The intensity change is mainly governed by “spin-averaged quantities” such as the total density of states. On the other hand, polarization-sensitive spectroscopy using circularly polarized light differentiates between “up and down spins” and, thus, the measurement of Faraday effect, magneto-circular dichroism and magneto-optical Kerr effect provides information about the spin-polarized density of states in magnetic materials (see Fig. 1). 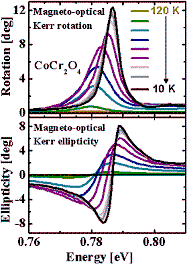 Since these magneto-optical effects are usually weak, their detections requires outstanding signal-to-noise ratio on broad spectral range, which is provided by a polarization-modulation technique in our lab. 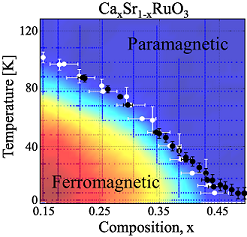 In order to study the local magnetization and susceptibility in composition-spread magnetic films and heterostructures, we developed a magneto-optical microscope with a spatial resolution of ~20 μm. With this setup, we could investigate the magnetic phase diagram of CaxSr1-xRuO3 composition−spread films with high resolution in composition and clarify the role of disorder in the region of the ferromagnetic−paramagnetic quantum critical point (see Fig. 3) [2].